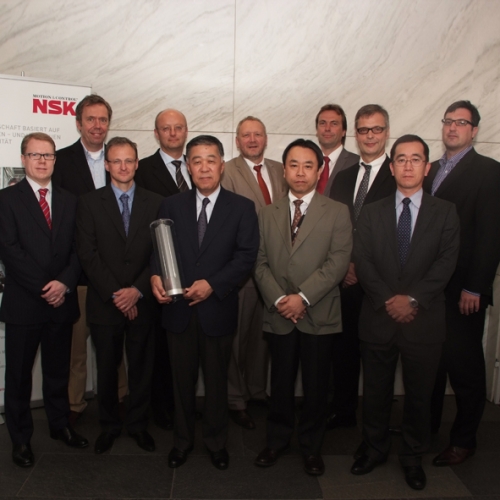 In June 2010, NSK was presented with a Volkswagen Group Award 2010 by Volkswagen AG. With this award, the car maker acknowledged the development of a new electric power steering system (EPS) for the Polo Global, which VW has been manufacturing in India since April 2010.

NSK’s Automotive division has been supplying components such as wheel bearings to VW for some time. Although the Steering Systems unit has been developing steering columns and systems since the 1980s, it only began working for VW in 2008 and was awarded the contract to develop the electrically powered steering system for the new VW Polo Global.

The development work rested on close collaboration between the VW headquarters in Wolfsburg (Germany) and NSK’s development facilities in Maebashi (Japan) and Ratingen (Germany). A special production plant was established in China to produce the EPS systems including the steering gears. At the plant, 400 staff are involved in producing the ready-to-mount steering modules, which will also be used for other VW vehicles around the world in the future.

Thanks to its mechatronics expertise, NSK began developing electrically powered steering systems at an early stage. Due to their compact design and energy efficiency, these systems are ideal for use in compact vehicles. NSK is now the global market leader for electric power steering systems.

Europe’s leading car manufacturer uses the annual Volkswagen Group Award to honour its best Group suppliers. In his address, Professor Martin Winterkorn – Chairman of the Board of Management at VW AG – offered a glimpse of things to come for the Group’s suppliers: “The Volkswagen Group has set itself the ambitious goal of becoming the leading car maker in both economic and ecological terms by 2018. To achieve this, we need innovative, efficient and reliable suppliers.”

According to Professor Martin Winterkorn, developing the mobility of the future is a particular priority. NSK can make a valuable contribution here, not just with its highly efficient electric steering systems. The company has also developed bearings specifically for the requirements of hybrid and electric drive systems.