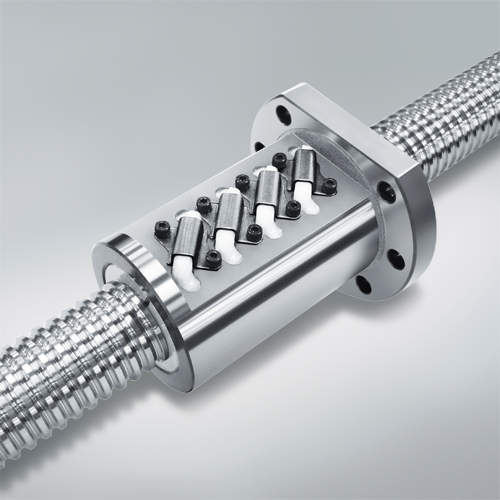 What are the latest trends in electromechanical drives for machine tools? Find out at the EMO trade fair. Linear technology makes a major contribution towards ensuring that new generations of machine tools are more energy-efficient, more powerful and more precise than earlier models. Visitors to the trade fair will be able to see this for themselves.

If you were to ask users of machine tools to list their key requirements for new machinery, you could not expect them all to say the same things. However, there may be factors that will crop up time and time again, such as the greatest possible energy efficiency, minimal downtime and long servicing intervals, high productivity, environmentally friendly operation, compact designs and the quietest possible running.

When it comes to meeting these requirements and delivering the features users want, manufacturers of linear drives – or to be more precise, producers of ball screws and linear guides, which are used in almost all machine tools – also have a role to play. You only need to look at the new products NSK will showcase at the EMO trade fair to see that manufacturers have taken up this challenge. The company’s innovations are closely linked to the latest trends in the machine tool industry.

Quiet running at high speeds
Manufacturers of ball screws belonging to the medium performance class are confronted with contradictory demands. Customers expect high traverse rates, which can best be achieved by using drives with a large lead. At the same time, they want a high level of precision and accurate positioning, which are best attained by selecting a small lead.

NSK has developed a new series which meets both requirements. The range consists of high-speed drives that can achieve a maximum dn of 160,000 thanks in part to a newly developed ball recirculation system. At the same time, the drive systems boast very high precision and exceptionally quiet running. This in turn means that noise levels are very low, making the HMS series ideal for designing reduced-noise, high-performance machine tools.

Precision thanks to perfect temperature control – with nut cooling
There is good reason to strive for optimum temperature control in ball screws, as this goes a long way towards meeting the demands for maximum precision. This is because the movement of the nut on the spindle generates friction, which is converted into heat and causes dimensions to change. This factor should not be underestimated: a temperature increase of just 10oC causes a one-metre spindle to stretch by no less than 120 µm. In practice, this can mean that machine tools do not deliver the necessary precision.

In such cases, machine manufacturers have until now used temperature-controlled ball screws with a hollow shaft through which coolant is routed. Or – and this is one of the innovations NSK will demonstrate at the EMO trade fair – they can use a system that features nut cooling. With nut cooling, the drive’s temperature control system works at precisely the point where heat is generated, i.e. the area of contact between the nut and the spindle. The nut fitting is also effectively cooled and the guiding table likewise maintains its predefined temperature.

Compact designs
Ball screws for metal forming systems (presses) and injection moulding machines need bearings with low friction and high capacity. For this reason, multiple-row angular-contact ball bearings with extra large balls are used. These increase the contact surface and are capable of absorbing high axial loads. NSK’s TAC-HR series has proved invaluable for such exacting requirements, lasting around five times as long as conventional angular-contact ball bearings. Now, a new series is available that offers the same performance profiles and load ratings, combined with considerably smaller dimensions. This is thanks to the smaller internal diameter of the new TAC-SHR series, which enables ball screws with smaller shaft diameters to be used at the shaft end, without the need to increase the number of ball bearings per linear axle. This in turn makes it possible to realise more compact power train designs.

High speeds and heavy loads
High-load ball screws enable even heavy loads to be processed precisely, quickly and efficiently. In line with the trends towards higher processing speeds, machine manufacturers are calling for high-load linear drives capable of reaching ever-higher speeds. A new series caters for this development. It features an improved ball recirculation system, which makes it possible to achieve higher traverse rates and significantly reduces operating noise. This enables the rotation speed of the extra large balls to be doubled for components with spindle diameters of 140 mm or more.

Standard dimensions twinned with high precision
No doubt a lot of machine drive designers would like to see high precision twinned with standard dimensions and off-the-shelf availability. It is a combination that is difficult to achieve. However, a new series of precision ball screws will be presented at the EMO trade fair boasting connection dimensions compliant with DIN 69051-5 (ISO 3408), precision class C5 and off-the-shelf availability. Thanks to preloaded nuts, the drive units move without any axial play. This enables the machinery to run quietly and achieve highly precise positioning. In addition to all this, the new ball screws boast low running noise. Their high level of precision sets them apart from the many other linear drives with standard DIN dimensions on the market.

Improved seal without increased friction
A new seal concept developed for ball screws also fulfils two apparently conflicting demands that are often made. Sealing a drive very well often results in increased friction. The new X1 seal solves this predicament. Used instead of conventional labyrinth sealing, it has two individual seals to provide dual sealing performance (both internal and external). The shape of these individual seals has been optimised by means of computer-aided design. This results in just 3% as much dirt entering the component as with labyrinth sealing and a third as much grease leaking out as would otherwise be the case. What’s more, the improved seal only increases the torque resulting from the preload by 1%. This means that the new seal concept also enhances the easy-running and energy-efficiency properties of a high-precision drive – and therefore supports green engineering.

Development work continues apace
There will be plenty of exciting innovations in electromechanical drive technology on display at the EMO trade fair. However, the exhibitors cannot and will not rest on their laurels – especially when it comes to developing components for high-end machines that are produced by European – especially German – machine tool manufacturers and exported around the world. Machine tools like these are at the very forefront in terms of key parameters such as productivity, processing speed and precision. Machine manufacturers rely on suppliers and system partners with strong development capabilities – and you do not need to be clairvoyant to predict that international competition will increase still further and the speed of innovations will remain high in the future. NSK is the world’s largest manufacturer of ball screws and acts as a development partner to many major manufacturers of machine tools. The company is responding to the forthcoming challenges by expanding its European Technology Centre (ETC) in Ratingen (Germany).